If you are having a medical emergency, call 9-1-1. Refresh your screen to get the latest wait time. For the most accurate wait time, call the hospital. 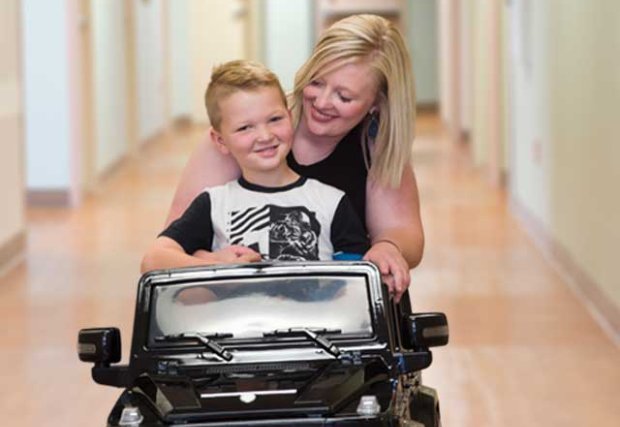 Driving himself to the operating room helped make surgery a smooth ride for 6-year-old Bentley Bailey.

The young athlete was having surgery because he’d broken his left arm in two places in a fall before a football game. When he arrived at Northwest Surgical Hospital the morning of his procedure, he was excited to see the miniature Mercedes-Benz® waiting for him.

“He was like, ‘Yes, I want to drive it,’” says his mom, Brittaney Bailey, who gave her permission to let him “drive” after talking with the staff. “He literally gave me a kiss, got into the car and off he went!”

Brittaney says she was a little hesitant at first because she wasn’t going back to the operating room with Bentley, but the staff explained everything to her, and she knew he was in good hands. Bentley was the first patient to use one of the remote-control cars donated by Chauncey’s Automotive to help make surgery less scary.

Learn more about surgery at Northwest →

“The nurse is the one actually controlling the remote,” says Brittaney. “Bentley would stop, then go back and forth. He thought that was the funniest thing ever. He went back into the operating room laughing … I knew he was having a good time, and if he wasn’t scared then I wasn’t going to be scared.”

When Bentley came out of surgery he was a little groggy but was back to his normal self after about 20 minutes. “We had the follow-up appointment one week after surgery,” says Brittaney. “The doctor said his arm was healing perfectly.”

Getting back to good health was a priority for Bentley, who is now in second grade and loves sports and staying active. From the moment they were referred to Northwest by their doctor at Amarillo Bone & Joint Clinic PLLC, the process went smoothly.

“The staff is so friendly and professional, they make you feel very welcome,” says Brittaney of their care at Northwest. “I would choose Northwest Texas any day just because the staff is so amazing. It was a great experience.”

A wide variety of outpatient procedures are performed at Northwest Surgical Hospital for patients of all ages. Northwest is the first hospital in the Texas Panhandle to have the da Vinci® Surgical System at a surgery center. This robotic platform enables doctors to perform complex procedures using a minimally invasive approach.